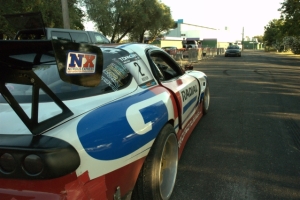 First off I hope everyone had a fantasticly fantastic turkey murdering-pants button popping-slopping on the couch- Thanksgiving weekend.

This post will not involve anything about your moms greatest food recipes or how to slice that weight you gained from the holiday in half. No this post is about a recipe of roasting tires, not roastings turkeys. The bay area’s finest drifters come out to play for a Formula D license accompanied by alittle bit of fun competition on the side.

Like an annual family thanksgiving dinner there’s familiar faces, new comers, and the ones who aren’t new but just came cause they heard that food eating competition will be too good to pass up. Being the last round of the pro-am series alot was riding on the shoulders of the top seated drivers since the Top 3 drivers get their FD License and a randomly chosen “Wildcard” gets a lucky license aswelll. The attendance of drivers were low though, I think there were around 13-14 competitors that were actually driving in the event compared to the last events there would be alittle more (20ish drivers), though made qualifying a easier since all you had to do was run to be in the actual show.

On a side note, if you have been following our pro-am coverage Nick Bayati was running a four cylinder turbo KA-Turbo in his car but this round came out with 2 more cylinders with a rb25det which apparently got running at a moments notice before the event. You can tell all day he was figuring out the car slowly getting more and more comfortable as the runs went on becoming a very deadly competitor.

Seems like mostly everyone was getting the course down during practice since the track has been slightly changed. Lex king had a few changes done to his car with the addition of a wing and a few other tidbits. A new comer Girl drifter came to play in her white s13 hatch which layed down some pretty good runs throughout the day looking to be a solid competitor as practice went on. So lets get to the action.

First battle up was Matt Coffman in his Rocket Bunny Kitted hatch and Josh Mcguire in his Shifty Fifty White s14. Josh’s car was looking a little shakey from what seemed like some sort of steering issue but Matt had very nice form throughout the course which beat out Josh’s s14…

Next up was Nick in the S13 Coupe and TylerWolfson in the Radial Tire RX7. It was pretty even on nicks follow run from both drivers but seems nicks new motor had lost alot of power and said “nah bro, let me take a break” which required him to bow out early with the help of a tow truck giving Tyler the Double-you.

Then it was time for Matt Madrigali in the Green s13 Hatch and Idontknowhisname Green FC Rx7 to do business on the track. Matt had a good distance between him and the rx7, next run though the RX7 spunout allowing Matt to advance to the next round.

Up to bat was Sean Hoover in his battle scar riddled S14 and Lex Kings super sexy sauce Fatlace Rx7. Lex on his lead run had followed suit with the previous fc and also spunout although his chase run was great, it just wasn’t enough to take the win into overtime. Sean advances!

Marcus Fry in his 510 was ready to battle with Joe (not josj lulz)Mcguigan’s Fatlace IS300, josh seemed to be getting to much grip or something coming in and out of drifts throughout the course then straightening out coming off the bank, then solidified Marcus’s spot for the next battle.

It was time to get-it-on with Alveen Gideon in the AE86 and Melissa Grace Newcomer Girl Drifter in the white 240x Hatch. The hatch though straihtened out at the end of the course allowing Alveen to advance onward.

Eugene’s flame was burning bright going against Matt Coffman who was consistent all day. Eugene wanted that podium and it showed with flawless runs he advanced onto the next battle.

Tyler and Matt were next in line for the drifting battlegrounds. During Tylers lead run there were minimal errors by either driver until it was Matts turn to lead. Tyler decided to put the afterburners on (literally) to stay close to Matts door throughout the run…Tyler moves on with proximity!

Stealth Customs Robin Webber was now ready to do battle with Sean in another battle of the S-Chassis’s. Rob had a slight lead in his leading run against Sean but when roles reversed Sean caught the spinout bug and Rob advanced onto the next battle.

One word explained this battle between Marcus and Alveen and that was: FUUUUUUUUUUUUUUUUUUUUU!!!! These guys were hard charging every single run with a rally of “One more times” chants from the crowd, everyone screaming when trading paint on walls or just a hairline away from the bank wall, girls throwing they panties, god playing a guitar solo, i mean like everything awesome you can think of…made this battle. I think it took 3 OMT’s until a victor was awarded between the two which they both did valiantly from constant undecided battles. Marcus was the one that came out on top but Alveen left with a smile on his face and praised with high fives as he hit the pits.

Tyler and Eugene both put down great runs but Tyler made sure that his flame wasn’t going to be put out. So using his dancing triangles to do the super secret rotary salsa dance he made a small gap on his lead run against the showstopper Eugene. Tyler advances! (i dont know why but i dont have any pics besides those two WTF!)

Marcus had proximity on his side going against rob, staying as close as possible without making a mistake. Rob couldnt match the proximity but had a clean run though wasnt enough to trumph the deepfried passion marcus had to win, Marcus onward!

Rob then had to faceoff with Eugene for the 3rd place spot for the day. Eugene had a clean lead run but during his chase run he was on robs door then looked like he was going to try to pass causing him to straighten out at the end of the course. Rob had a sligt advantage in the OMT giving him the 3rd Place finish!

Marcus layed the smoke down opening the distance on his lead run leaving tyler a good distance a way. Marcus then went big and tried to stick close to tyler at the begining of the bank Kumakubo style, unfortunately though Datsuns weren’t made to fly which eventually led him to lose drift and then spunout in the infield…….so it was decided.

and your winner in 1st Place:

Tyler Wolfson in the Radial Tire FD RX7! But this wasn’t all of the cake until a few days later where the people who earned their Formula Drift license after the points were calculated would be announced and a wildcard was chosen. The lucky ones to recieve to license to ILL were the following:

Congratulations to the new Formula D rookies and thanks to everyone who has participated in the series to even have a spectacle to watch. Most of all I would to just thank Geoff Pitts, Nos energy drink, lifeblasters and the entire thunderdrift program to even make these kind of events happen at all. Also would like to shout out to Drop that frame clothing, weir performance, cascar machine shop and elite tire & auto, honda, yo moma, my moma, his moma, mah girlfriend and ofcourse the homies that helped me get to the events.

Make sure to like us on facebook and come back to see more updatesa about us and the local norcal drift events!