Hurry, hurry, hurry come get your thrills from GoldenGate Drifts (GGD) first round of their Formula D Pro-am series! If you havent checked out our practice day coverage and the pit area go here: GoldenGate Drift: Spectator Standpoint .

After practice day drivers suited up again for the main show after making fixes and dialing their cars for the last time before qualifying. There were quite a few more cars that were around this time from the day of practice but still made for a dam good show. 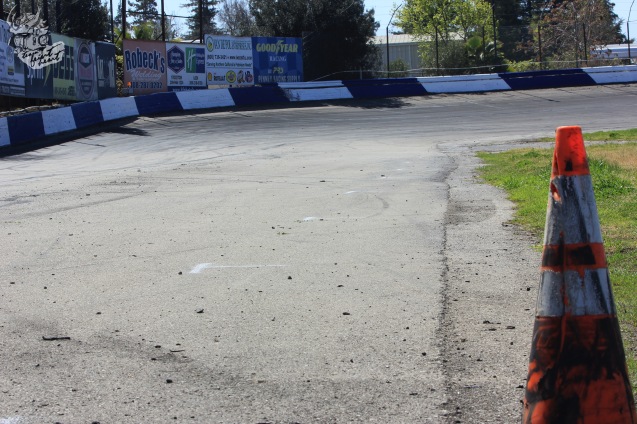 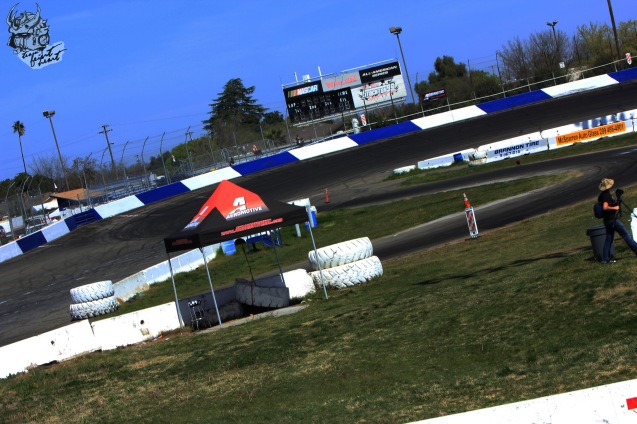 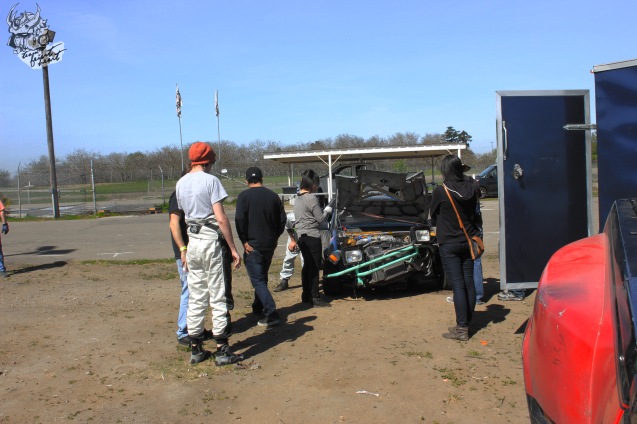 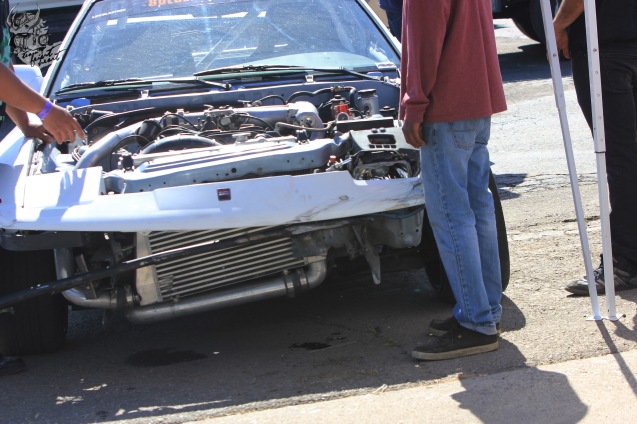 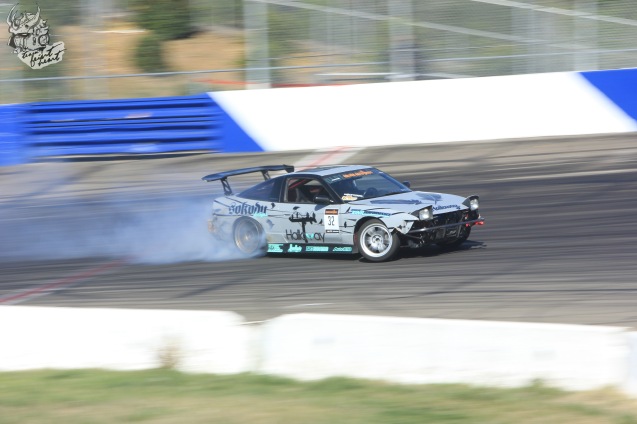 Stockton walls are known to be “very unprofessional and very mean” to drivers no matter the skill level. Few were taken completely out of the event but wall taps were much appreciated. In a way its kind of like a high five between the driver and the wall resulting in the crowd going completely nuts. 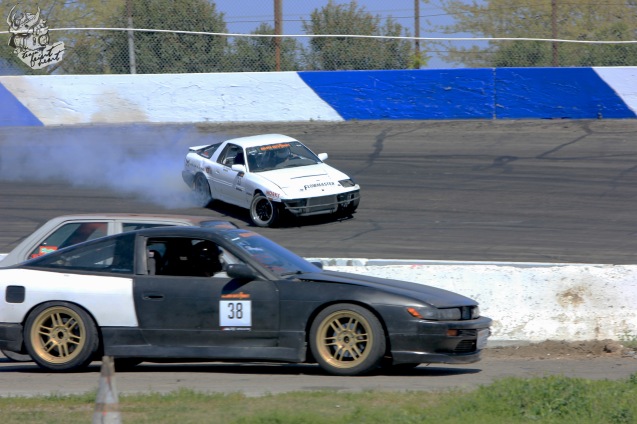 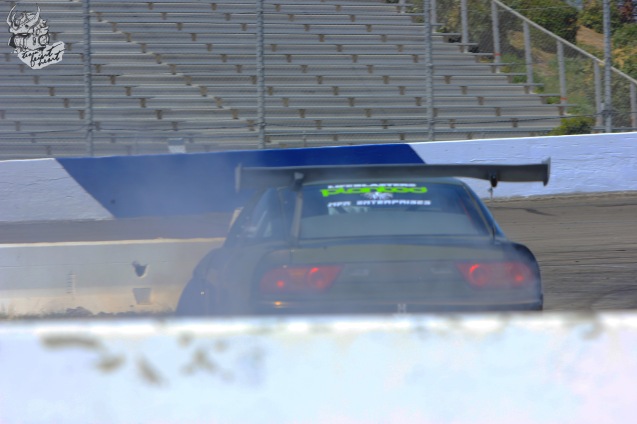 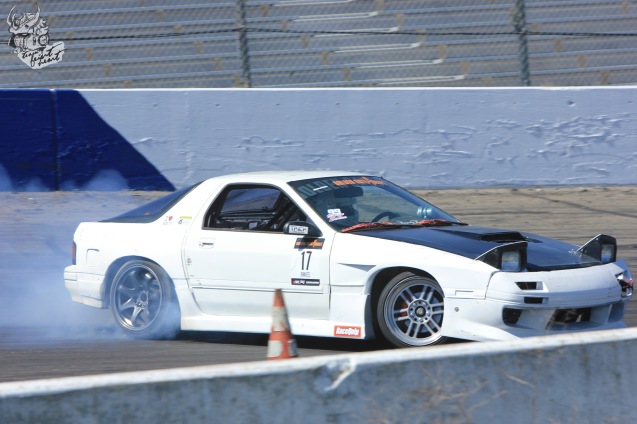 Qualifying went by fast with an array of spin outs  wall taps and smoke filled runs drivers pushed their cars to limits to get a top spot in the main show. A statement was made this day with Alveen Gideon receiving the first place qualifier spot with the least amount of horsepower almost comparable to a washer or dryer definitely made him standout from the rest.

First up for battles was Nick Bayati’s RBS13 against  Alveens limiter screaming corolla. Nick has upgraded the RB since the last time we met making 400ish whp and added a Big Country Labs wing to keep it on the floor but he only had small amount of actual seat time with the setup. During Nicks lead run he spun out allowing Alveen to advance to the next round. 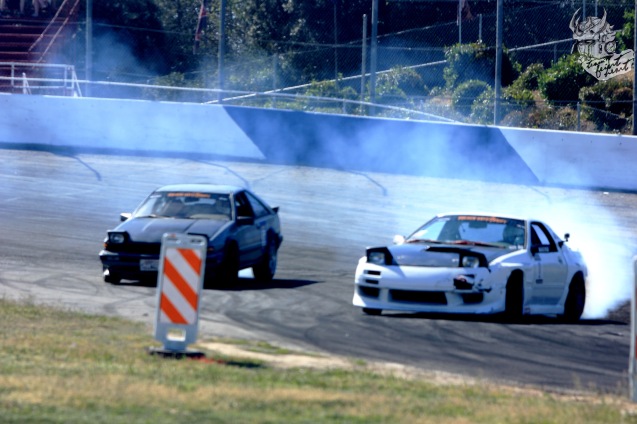 Next up Julians awkward but functional S12 vs. Joe Aimes dancing triangles rx7 were ready to do battle. Its seems that Julian caught the dizziness leftover from Nick and also spun out  just before the second bank giving Joe the win.

Familiar face Matt Madrgali also fitted with a new Big Country Labs wing was going against Ty Milner which rumor has it that his Motor was from Matt Fields old Formula D car. Would it be enough to take out Matt’s two event winning streak? 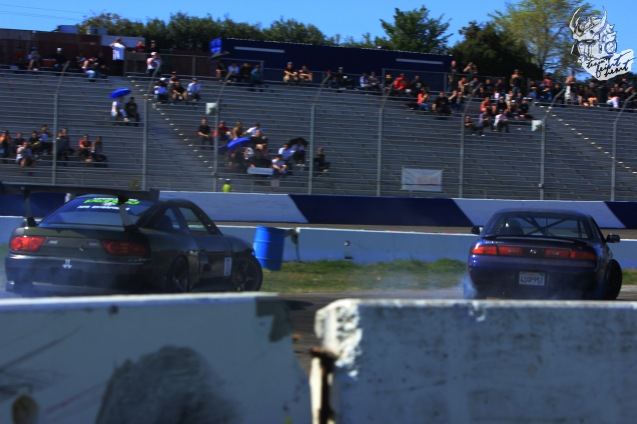 Ty’s motor was screaming to catch but Matt’s consistency is was what took the cake. 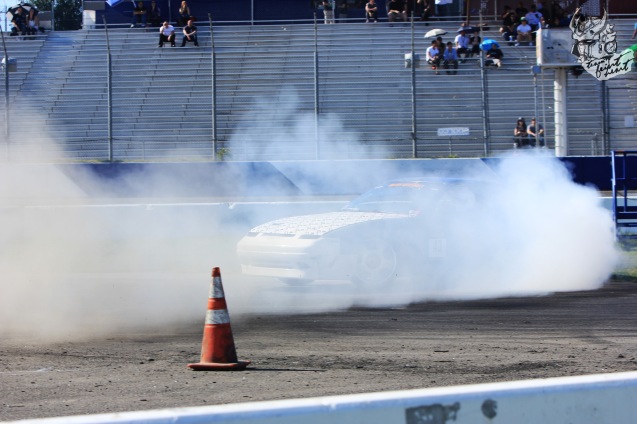 The pair of Supermade Instant Gentlemen kitted cars which was Chris Mills in red and Joshua Sher in blue. On the Josh’s follow run he had spun out at the end of the first bank from correcting to catch up to Chris. Chris advances. 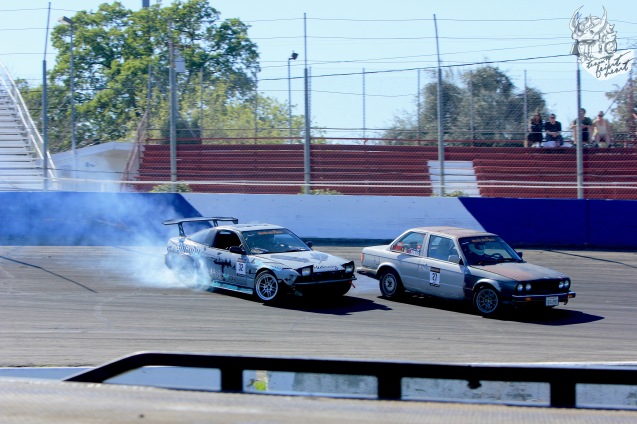 Jeff Wolsons Grey hatch was to do battle with this un-sponsored E30….Jeff like a black hole sucked him in and on the E30’s follow run tried to catch Jeff but spun out during the process, Jeff Advances! 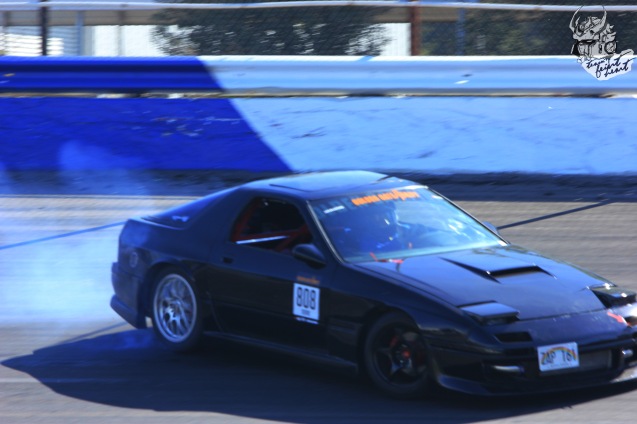 Jeff Yorks sleek RX7 was scheduled to go against Joe Busto’s V8 S14 which ended early as well from a spin from Joe. 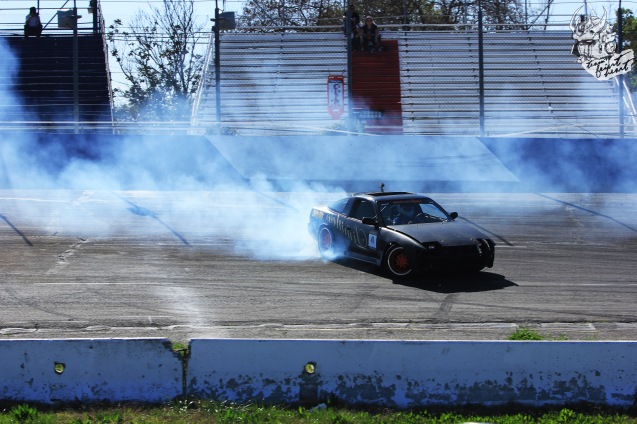 Limitless motosports Will Griffith was next in line to due battle against Matt Coffman’s mayhem of a S13. Matt had a few private test and practice before the event to ensure a top spot but old habits die hard. A spin out at the beginning of the second bank solidified Will’s journey to the great 8. 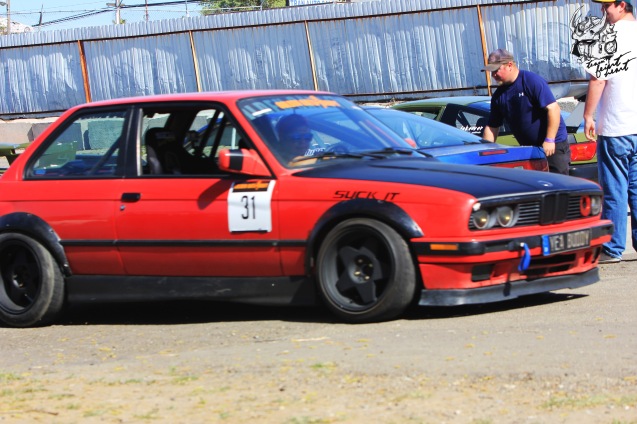 Donovan had a bye run since Joe Farsati in the white supra headbutted the wall during qualifying breaking a line to his oil cooler. 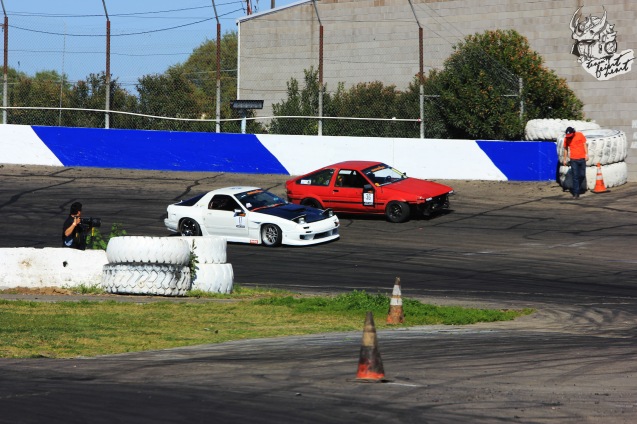 Alveen was on fire all day with his low powered corolla appreciated by everyone at the event, Joe Aimes was looking to put that fire out by being on his door the entire run. Unfortunately Alveen’s run became a little sloppy letting Joe slip away with the win. 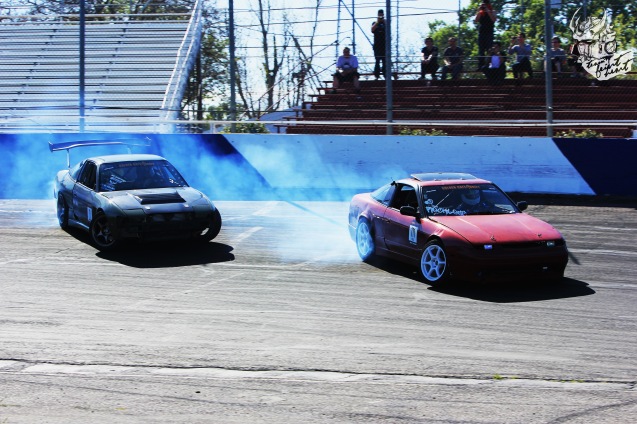 Calm n Cool Matt Madrigali was ready to let the Hulk out once again only to be stopped by red hulk Chris Mills after a long battle involving an Omt. Chris’s clean line and proximity drew him the winner card.

A sloppy follow run from Will gave Donovan Brockways a big enough gap to get him to the top four. Can Donovan get podium in two different series?

Jeff’s rx7 was dancing  but not  enough to getaway from Jeff Wolfsons s13 staying on his door till no end. Wolfson advances.

Chris and Joe  were ready to hit the bank together, apparently Joe decided to stick around at the beginning of the second bank like most other drivers had spun out before him. CHRIS TO THE 1ST PLACE ROUND 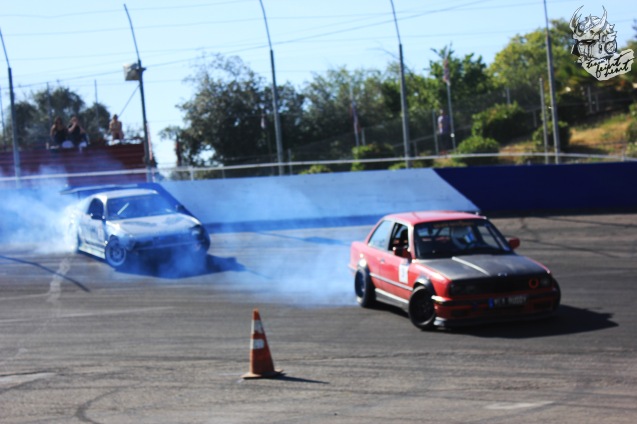 Donovan was ready to go two for two during his debut to pro-am series after getting pass Jeff Wolfson. Donovan shot himself in the foot by straightening  in the infield area. JEFF TO 1ST PLACE ROUND 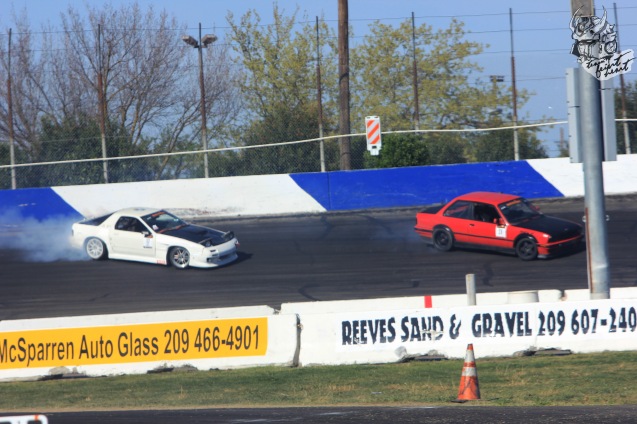 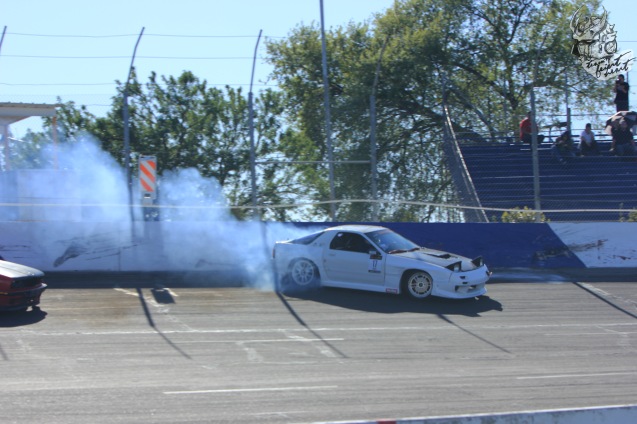 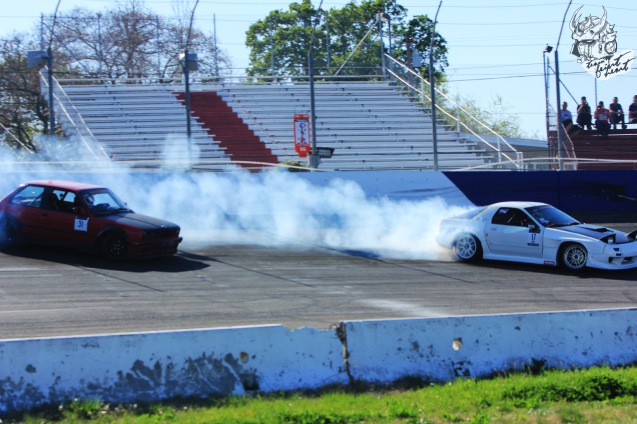 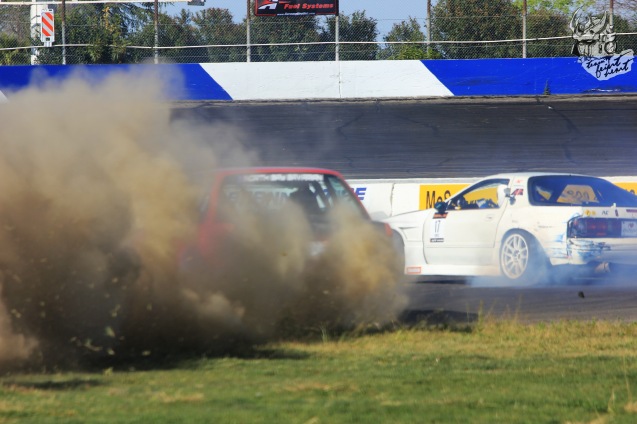 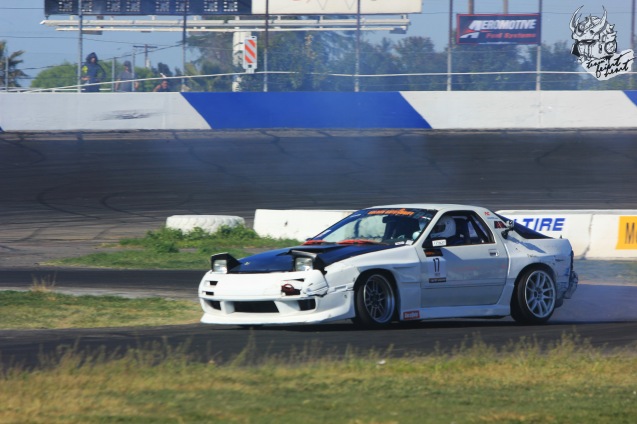 When Joe was going up against Donovan for the Third place spot he did a wall tap  straight into the bank. Donovan maneuvered well his shallow angle may have given Joe the advantage? or did Joe lose angle after the wall tap? 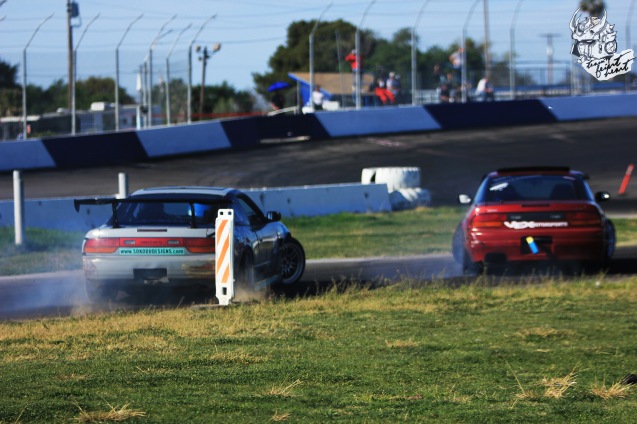 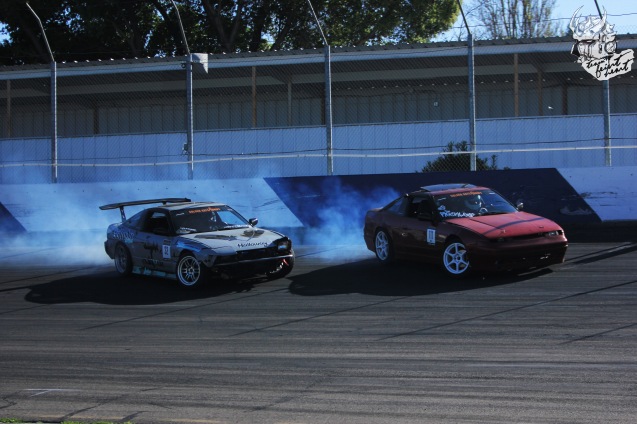 Two guys that can’t be stopped open the opportunity for the crowd to get loud and fatigue to rise between Chris Mills and Jeff Wolfson for the first place spot. Honestly they were so on top of their game every run looked like the last with no give or take from either driver……. after 2-3 OMTS a victor was selected.

So that’s all she wrote from the debut for GoldenGateDrifts Round.1 Pro-am series which by far from this example is going to be a great series to watch or compete! Congratulations drivers and see you next time!

VIDEO IS ALSO UP SO CHECK IT OUT!!

2 thoughts on “GoldenGate Drift Rnd.1- In for the fight”